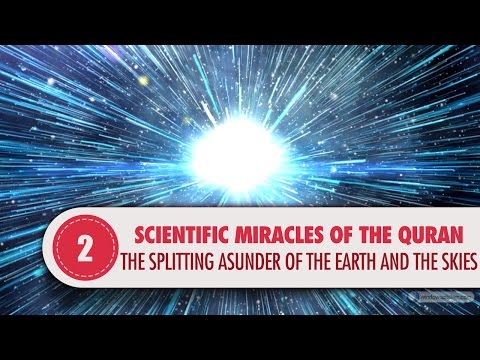 The issue how the universe came into being has always been one of the issues that scientists wondered about and discussed most. Many theories were put forward regarding the issue throughout history; each theory was refuted in the course of time as science advanced and they were labeled as wrong.

The theory that is agreed on and is widely accepted today is the Big Bang Theory. The Big Bang is a cosmological model claiming that the universe came into being 13,7 billion years ago from an excessively intense and hot point.

It was first put forward in 1920’s by Russian cosmologist and mathematician Alexander Friedmann and Belgian physicist Georges Lemaitre. This theory, which assumes that the universe had a beginning, was widely accepted by scientists especially by physicists because it is supported by various evidences.

This knowledge, which scientists were able to obtain only in the 19th century, was informed by the Quran 1400 years ago.

The following is stated in verse 30 of the chapter of al-Anbiya: “Do not the Unbelievers see that the heavens and the earth were joined together (as one unit of Creation), before We clove them asunder? We made from water every living thing. Will they not then believe?”

The word translated as "joined together" in the verse is the Arabic word "ratq". It means fused, coherent, inseparable. That is, this word is used in order to describe two substances that form a whole in Arabic.

Now, let us go back to the verse: In the verse, a situation in which two things are joined together (ratq) is mentioned. Then, they are separated (fatq). That is, one of them comes out by tearing the other one.

When we think of the first moment of the Big Bang, we see that the whole matter of the universe was together in one substance. In other words, everything, even the skies and the earth that had not been created yet, was in the same substance, interbedded (ratq) and inseparable. That is, they were joined together as it is stated in the verse. Then, this substance broke into pieces through a big explosion. That is, the deed that the Quran defines "as fatq" took place.

The Quran informs us about the Big Bang Theory, which was discovered in the last century, more than 1.400 years ago.

Since it is impossible, there is only one alternative left: The book that mentions this fact is the book of Allah, who collected the whole realms in one substance and who created the earth, the sky and everything in them through a big bang after that. Yes, the Quran is the pre-eternal book of that Being. We believe in it. For more detailed information, you can visit the websites below.