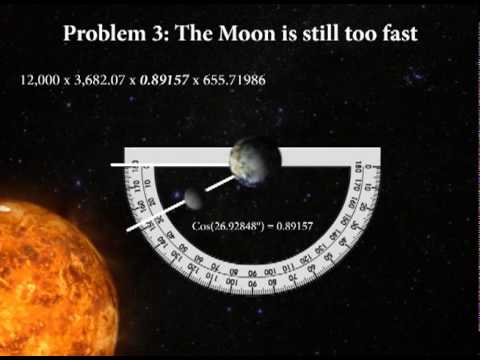 UPDATE:
Someone ran a simulation using n-body (considered by many to be the de-facto standard on orbital simulation routines). The result was that the velocity of the Moon varied by +/- 0.06% depending on the position of the Moon as the Sun was removed. 0.06% is a mere 1/166th of the required 10% that the bogus cosine(26.928) removes.

The conclusion from the physicists on the forum was that this is merely numerology and has no basis in physics at all.

The link to the physics forum discussion is here:
http://www.physicsforums.com/showthread.php?p=3048263#post3048263

This video investigates the claim that the speed of light is indicated in The Quran.

Personally I’d have just written 299,792,458 as the first text in the book but no, apparently for some reason god (aka "Allah") decided to make it really quite convoluted – and also suspiciously fabricated.

There isn’t a single calendar on Earth with only 328 days in a year, especially not the Islamic calendar. That’s why Sidereal hours in a month * 12 is wrong.

===Idiotic comments===
"For example slowing the moon down by half should result in half of the speed of light." That’s not﻿ true. The moon only slows down if ocean friction transfers Earth’s rotational kinetic energy to the moon. The moon would recede and Earth day would increase but the ratio Lunar Orbits/ Earth Day remains unchanged.
-Wormhole199