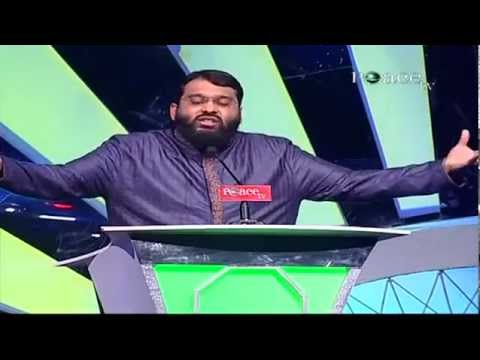 Support Digital Mimbar, Shop Khalifah Klothing: http://www.khalifahklothing.com
How is the Quran the greatest Miracle of Islam?

Public lecture delivered by Yasir Qadhi titled ‘The Miracle of the Quran’ at the International Islamic Peace Conference 2009 held at Somaiya Ground Mumbai, India 2009, as shown on Peace TV.

Yasir Qadhi is the Dean of Academic Affairs at AlMaghrib Institute, the man behind the curriculum and other academically intensive programs like IlmSummit. Shaykh Yasir is known among his students for his excellent Tajweed in both Arabic and the English language (i.e. his perfect enunciation of every letter).

Shaykh Yasir graduated with a B.Sc. in Chemical Engineering from the University of Houston, after which he was accepted as a student at the Islamic University of Madinah. After completing a diploma in Arabic, he graduated with a B.A. from the College of Hadith and Islamic Sciences, and completed a M.A. in Islamic Theology from the College of Dawah. He is in the final stages of completing his PhD in Religious Studies from Yale University.

Shaykh Yasir Qadhi is a resident Scholar of Memphis Islamic Center. He is also a lecturer at Rhodes College, in the Department of Religious Studies. Like DigitalMimbar on Facebook: http://www.fb.com/TheMimbar
Follow DigitalMimbar on Twitter: http://twitter.com/DigitalMimbar