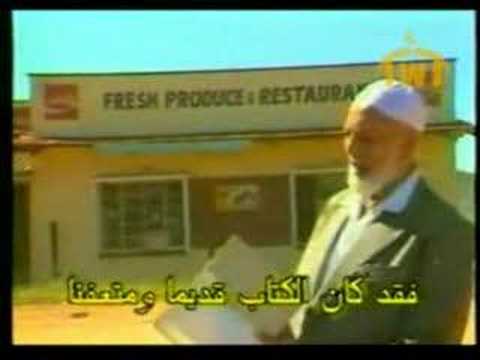 Sheikh Ahmed Hussein Deedat (1918 – 2005), was a Muslim scholar of Comparative religion, an author, lecturer, and an orator. He was best known for witty inter-religious public debates.

Early life:
Ahmed Deedat was born in Surat, India in 1918. His father had emigrated to South Africa shortly after the birth of Ahmed Deedat. At the age of 9, Deedat went to join his father in what is now known as Kwazulu-Natal. His mother died few months after Deedat left for South Africa. Applying himself with diligence to his studies, Deedat was able to overcome the language barrier and excel in school, getting promotions until he completed standard 6. But had to start working at the age of 16.

In 1936, while working as a furniture salesman Deedat came across missionaries at a Christian seminary on the Natal South Coast. In between the deep racial divides, the religious ideology was used by the authorities to numb and pacify the masses. This is considered to be a major influence on Deedat’s interest in comparative religions.

Another inspiration on his intellectual development came from the book "Truth Revealed" by Rahmatullah Kairanvi on the concept of holding inter-religious public debates. The book was written especially in response to the missionary efforts of Reverend C.C.P Fonder, the head of the Christian Mission of India, in 1864.

Lectures and Debates:
Deedat’s first lecture, entitled "Muhammad: Messenger of Peace," was delivered in 1942 to an audience of 15 people at a Durban movie theater. Within a short space of time, the numbers grew and people crossed the racial divides which were then prevalent in apartheid South Africa, to listen to him, and to participate in the questions and answers sessions which followed his lectures.

With the increased success, Deedat engaged into broader range of activities over the next three decades. He conducted classes on Bible studies and conducted numerous lectures. Da`wah (inviting people towards Islam) became the dominant factor of his life, with the audiences at his lectures reaching forty thousand. In 1957, Deedat, together with two of his friends, founded the Islamic Propagation Centre International (IPCI) and remained its president until 1996.

According to David Westerlund, Deedat’s aimed at providing Muslims with theological tools for defending themselves against the intense missionary strivings of many Christian denominations. He used English instead of Arabic or any other language to get his message across to Muslim minorities in the western world.

Not knowing Hebrew or Greek, Deedat’s trademark was his verbatim quotes from secondary Christian sources combined with selected passages from English translations of the Bible to give credibility to his argument that the Bible supported the Islamic creed and was at variance with the doctrine of the Trinity and other foundational Christian teachings. In terms of his memorization of Biblical texts, he had no peer in the non-Christian world.

International coverage:
In 1986, he visited Saudi Arabia for a conference, and in his first television interview, became notable in the Arab world with his dynamic personality and knowledge of comparative religion.
He subsequently visited Australia, Denmark, Kenya, Morocco, Pakistan, Sweden, and the United Kingdom on lecture and debating tours.
In the United States, he became famous for a debate with the American Reverend Jimmy Swaggart at the University of Louisiana.

Death:
On May 3, 1996, Sheikh Ahmed Deedat suffered a stroke which left him paralyzed from the neck down, and also meant that he could no longer speak or swallow. He was flown to a hospital in Riyadh, where he was taught to communicate through a series of eye-movements. He spent the last nine years of his life in a bed in his home in Verulam, South Africa, encouraging people to engage in da’wah. He continued to receive hundreds of letters of support from around the world. During these years, rumors spread throughout the Internet that he was already dead, and even some websites that contained his pamphlets mentioned as early as 2002 that he was dead.