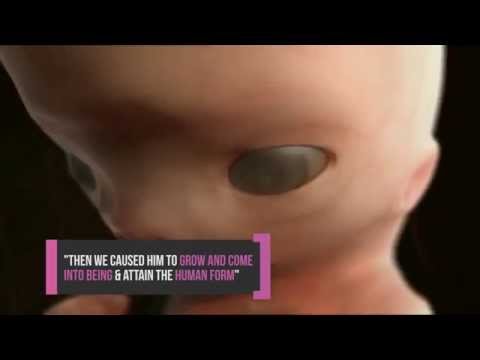 In the Holy Quran, God speaks about the stages of man’s embryonic development:

"We created man from an extract of clay. Then We made him as a drop in a place of settlement, firmly fixed. Then We made the drop into an alaqah (leech, suspended thing, and blood clot), then We made the alaqah into a mudghah (chewed substance)…" (Quran 23:12-14)

In comparing a leech to an embryo in the alaqah stage, we find similarity between the two[1] as we can see in figure 1. Also, the embryo at this stage obtains nourishment from the blood of the mother, similar to the leech, which feeds on the blood of others.[2]

Figure 1: Drawings illustrating the similarities in appearance between a leech and a human embryo at the alaqah stage. (Leech drawing from Human Development as Described in the Quran and Sunnah, Moore and others, p. 37, modified from Integrated Principles of Zoology, Hickman and others. Embryo drawing from The Developing Human, Moore and Persaud, 5th ed., p. 73.)

The second meaning of the word alaqah is "suspended thing." This is what we can see in figures 2 and 3, the suspension of the embryo, during the alaqah stage, in the womb of the mother.

Figure 2: We can see in this diagram the suspension of an embryo during the alaqah stage in the womb (uterus) of the mother. (The Developing Human, Moore and Persaud, 5th ed., p. 66.)

Figure 3: In this photomicrograph, we can see the suspension of an embryo (marked B) during the alaqah stage (about 15 days old) in the womb of the mother. The actual size of the embryo is about 0.6 mm. (The Developing Human, Moore, 3rd ed., p. 66, from Histology, Leeson and Leeson.)

Figure 4: Diagram of the primitive cardiovascular system in an embryo during the alaqah stage. The external appearance of the embryo and its sacs is similar to that of a blood clot, due to the presence of relatively large amounts of blood present in the embryo. (The Developing Human, Moore, 5th ed., p. 65.)

So the three meanings of the word alaqah correspond accurately to the descriptions of the embryo at the alaqah stage.