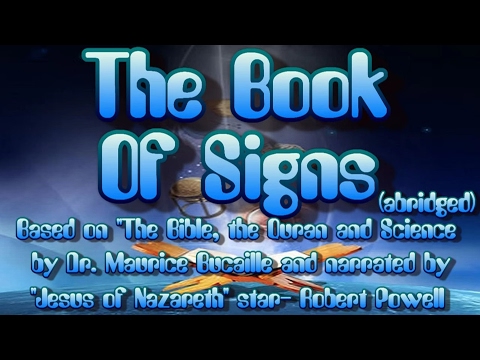 "Jesus of Nazareth" star Robert Powell narrates "The Book of Signs"; an educational Islamic video produced in 1986 with the approval of the Al-Azhar Committee in Egypt, the Saudi Daw’ah Council and the Malaysian Prime Minister’s Office. It is based on the scientific studies of Frenchman Dr. Maurice Bucaille who wrote among other books "The Bible, the Quran and Science," which details the parallels between the Quranic Worldview and that of modern Science- asserting that the Quran bafflingly anticipates all aspects of proven knowledge ranging from embryology to cosmology and still remains current and in tandem with scientific progress.

It being inconceivable that such accurate descriptions of elucidated modern knowledge could have come from an illiterate man who lived over 1400 years ago in the middle of the Arabian wilderness- in an era when scientific errors would have crept into the Quran if it were a man-made text. What’s more is that it remains today preserved exactly as it was revealed- the most unique Book on Earth [Revealed from the Heavenly domains by an All-Knowing Source].

The conclusion is inevitable; the Quran is the very expression of God’s Truthful Revelation.

I do not claim to own the copyrights of all the images, videos or audio clips utilised incidentally in the compilation of this educational video, and I acknowledge that they belong wholly to their original copyright holders and state that no malicious copyright infringement or violation is intended. The use of incidental copyrighted material is covered under the Fair Use (Copyright Act) 17 U.S.C Section 107, with particular emphasis on such use for educational and non-profit purposes, which states:
"Notwithstanding the provisions of section 106 and 106A, the fair use of a copyrighted work, including such use by reproduction in copies or phono-records or by any other means specified by that section, for purposes such as criticism, comment, news reporting, teaching (including multiple copies for classroom use), scholarship, or research, is not an infringement of copyright."
The copyrighted video clips used in this educational video have been extracted and reformatted from uploaded streaming material on public domain videos already live on YouTube, and as such, have inferior picture and audio quality to the professionally produced source material from which they originally came from and therefore not suitable for potential counterfeit reproductions. The same applies to the inclusion of certain copyrighted photos and images that have been degraded in composition and quality. They have been incorporated into the project by necessity because they benefit the presentation due to their symbolic and historical significance and enhance the educational awareness of viewers to the main topic of the video. Creative transformation has occurred by the embedding of personally created original artwork and animations into the newly created educational video and the complete removal of the original soundtrack to all copyrighted video clips which have been replaced by an insightful and uniquely original commentary for the purposes of scientific, religio-philosophic and scholarly review. The newly compiled video documentary is not intended to be used for commercial or monetary gain, but is rather an amateur presentation created purely for the purposes of publicly disseminating uniquely original educational information for non-profit gain in accordance with the YouTube submission policy. The overall usage of individual clips amounts to very little in relation to the original copyrighted works in totality, and the selected portions are respectfully and appropriately used to elaborate upon alternative and diverse religious and philosophical perspectives that do not necessarily represent the viewpoints of the original copyright holders. As I am not competing financially with the original copyright holders, this does not infringe upon their potential market share. This video is intended for use by subscribers and viewers to my YouTube site and is forbidden to be used for illegal profit or redistribution.

This disclaimer is embedded in the video presentation.