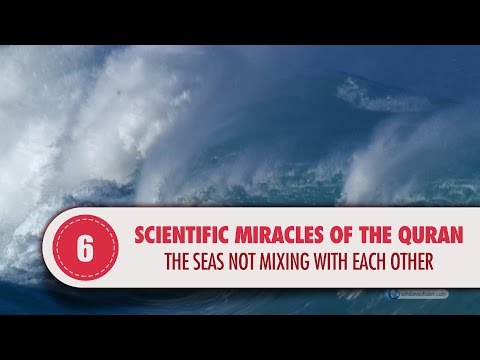 "We were investigating of some researcher’s judgments that put forth that there were some barriers that separated different masses of the seas from each other. As a result of various studies, we saw that the Mediterranean Sea has a peculiar natural level of salinity and density. At the same time, it has specific life forms. Then, we analyzed the mass of water in the Atlantic Ocean and saw that it was completely different than the Mediterranean Sea. However, these two seas, which merge at the strait of Gibraltar, were supposed to be equal or at least near to equal in terms of salinity, density and life forms that they had. However, these two seas have different structures even in places where they converge closely. Upon our investigations, we came across with an event that amazed us. or, there was a great water curtain at the merging point that did not allow these two seas to mix up. The same kind water barrier was founded by German scientists at Bab al-Mandab, where waters of Gulf of Aden and Red sea converge in 1962. In our later investigations, we witnessed the existence of the same kind of barrier in all merging points of seas that have different characteristics." For more detailed information, you can visit the websites below.