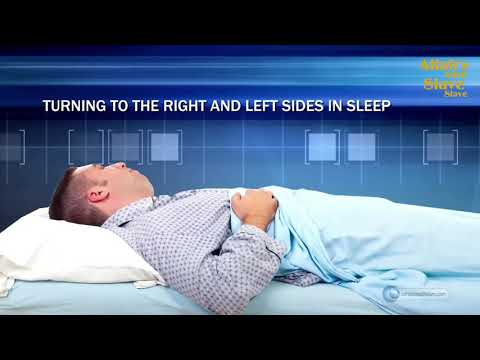 THE IMPORTANCE OF MOVEMENT IN SLEEP

You would have supposed them to be awake, whereas in fact they were asleep. We moved them to the right and to the left, and, at the entrance, their dog stretched out its paws. If you had looked down and seen them, you would have turned from them and run, and have been filled with terror at the sight of them. (Qur’an, 18:18)

The above verse refers to the People of the Cave, who remained asleep for hundreds of years. In addition, Allah also reveals that He moved their bodies to the left and right. The wisdom of this was only discovered in recent times.
People who remain lying down in the same position for long period of time encounter serious health problems, such as circulation difficulties, sores, and blood clotting in that part of the body in contact with the surface on which they lie.
The resulting sores are known as "bed sores" or "pressure sores." Due to the constant pressure on one part of the body when one is not moving for a long period of time, the blood vessels become constricted and can close altogether. As a result, the oxygen and other nutrients carried by the blood fail to reach the skin, and the skin begins to die. This leads to the appearance of sores on the body. Unless these sores are treated, fat and muscles can also die.
These sores, which form under the skin or tissue, can assume serious dimensions unless treated. If they become infected, they can even lead to death. The healthiest thing to do, therefore, is to change the position of the body every 15 minutes in order to reduce this pressure. Patients who cannot move themselves therefore receive special care and are moved every 2 hours by other people. The fact that these medical facts, only discovered in the last century, are referred to in the Qur’an is yet another of its miracles.