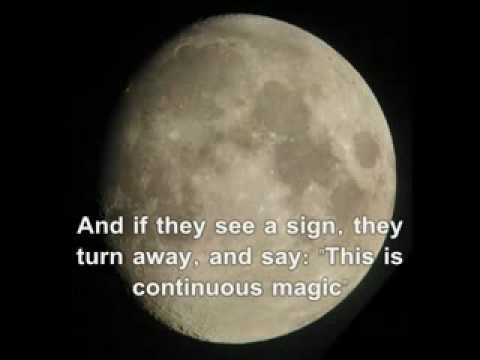 Go and see it on the website of NASA For Your Selves:

Let me quote it here from the link:

"What could cause a long indentation on the Moon? First discovered over 200 years ago with a small telescope, rilles (rhymes with pills) appear all over the Moon. Three types of rilles are now recognized: sinuous rilles, which have many meandering curves, arcuate rilles which form sweeping arcs, and straight rilles, like Ariadaeus Rille pictured above.
—–Long rilles such as Ariadaeus Rille extend for hundreds of kilometers.——-
Sinuous rilles are now thought to be remnants of ancient lava flows,
——–but the origins of arcuate and linear rilles are still a topic of research.———
The above linear rille was photographed by the Apollo 10 crew in 1969 during their historic approach to only 14-kilometers above the lunar surface. Two months later, Apollo 11, incorporating much knowledge gained from Apollo 10, landed on the Moon."

The miracle of the splitting of the moon was demonstrated before a certain gathering who persisted in denial of Muhammad’s Prophethood. As was related by ‘Adbullah ibn Mas’ud, while they were in Mina’ one night, the Prophet split the moon into two by a gesture of his index finger. The halves of the moon appeared one behind the mountain and the other in front of it. Then, the Prophet turned to us and said: ‘Be witnesses!’

The Qur’an refers to this miracle in the following verses:

The Hour has approached, and the moon split. But whenever they see a sign, they turn away and say, ‘This is evident magic’. (al-Qamar, 54.1-2)

Materialist philosophers and their unreasoning imitators, who want to cast a shadow with their vicious delusions over such a bright miracle of the Prophet Muhammad, upon him be peace and blessings, as the splitting of the moon, say: ‘If the splitting of the moon had taken place, it would have been known to the whole world and related in all subsequent books of human history’.

Answer: The splitting of the moon was demonstrated before a certain gathering who contradicted the Prophet Muhammad, upon him be peace and blessings, in his cause as an evidence of his Prophethood. It happened momentarily at a time of night. Also, there were obstacles which prevented the others from seeing it, such as mist, clouds and time-differences between different parts of the world. Besides, at that time science and civilization were not yet well advanced and not widespread, and, therefore, the observation of the sky was very limited. Last but not least, there was nothing to necessitate that it should have been seen all over the world. It is because of these reasons that the splitting of the moon was not witnessed in the whole world and related in the history books of other nations.

In order to remove such clouds of delusions concerning the miracle of the splitting of the moon, heed the following Five Points:

First point
The extreme stubbornness of the unbelievers in the Hijaz at that time is well-known and is recorded in history. When the Qur’an, however, announced this incident to the whole world through its verse, The moon split, not any of those unbelievers, who denied the Qur’an, dared to contradict it in this announcement. If this incident had not occurred before their eyes, they would certainly have taken this verse as a pretext to attack the Prophet more formidably in his cause. However, neither the biographies of the Prophet, nor the books of history report anything to suggest that they denied the occurrence of this incident. What was reported concerning their reaction is as the verse records: They say, ‘This is evident magic’. The unbelievers declared the event to be magic, and they added further that if the caravans in other places had seen it, it truly happened, otherwise the Prophet bewitched them. When, however, the caravans coming the following morning from the Yemen and other places announced that they had witnessed the event, the unbelievers showed their usual reaction, saying,–God forbid!–‘The magic of Abu Talib’s orphan has affected even the heavens!’