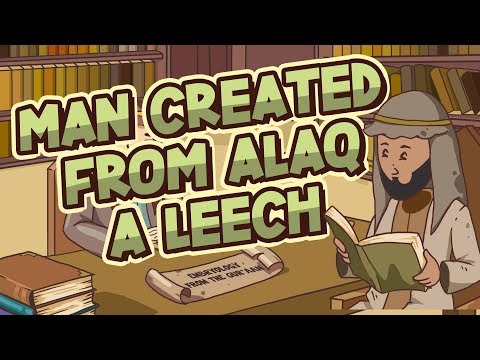 MAN IS CREATED FROM ALAQ A LEECH-LIKE SUBSTANCE
A few years ago a group of Arabs collected all information concerning embryology from the
Qur’aan, and followed the instruction of the Qur’aan: “If ye realise this not, ask Of those who
possess the Message.” [AlQur’aan 16:43 &amp; 21:7]
All the information from the Qur’aan so gathered, was translated into English and presented to
Prof. (Dr.) Keith Moore, who was the Professor of Embryology and Chairman of the Department
of Anatomy at the University of Toronto, in Canada. At that time he was one of the highest
authorities in the field of Embryology. He was asked to give his opinion regarding the
information present in the Qur’aan concerning the field of embryology. After carefully examining
the translation of the Qur’aanic verses presented to him, Dr. Moore said that most of the
information concerning embryology mentioned in the Qur’aan is in perfect conformity with
modern discoveries in the field of embryology and does not conflict with them in any way. He
added that there were however a few verses, on whose scientific accuracy he could not
comment. He could not say whether the statements were true or false, since he himself was not
aware of the information contained therein.
There was also no mention of this information in modern writings and studies on embryology.
One such verse is: “Proclaim! (or Read!) In the name Of thy Lord and Cherisher, Who created –
Created man, out of A (mere) clot Of congealed blood.” [Al-Qur’aan 96:1-2]
The word alaq besides meaning a congealed clot of blood also means something that clings, a
leech-like substance. Dr. Keith Moore had no knowledge whether an embryo in the initial stages
appears like a leech. To check this out he studied the initial stage of the embryo under a very
powerful microscope in his laboratory and compared what he observed with a diagram of a
leech and he was astonished at the striking resemblance between the two!
In the same manner, he acquired more information on embryology that was hitherto not known
to him, from the Qur’aan. Dr. Keith Moore answered about eighty questions dealing with
embryological data mentioned in the Qur’aan and Hadith. Noting that the information contained
in the Qur’aan and Hadith was in full agreement with the latest discoveries in the field of
embryology, Prof. Moore said, “If I was asked these questions thirty years ago, I would not have
been able to answer half of them for lack of scientific information” Dr. Keith Moore had earlier
authored the book, ‘The Developing Human’. After acquiring new knowledge from the Qur’aan,
he wrote, in 1982, the 3rd edition of the same book, ‘The Developing Human’. The book was the
recipient of an award for the best medical book written by a single author. This book has been
translated into several major languages of the world and is used as a textbook of embryology in
the first year of medical studies. In 1981, during the Seventh Medical Conference in Dammam,
Saudi Arabia, Dr. Moore said, “It has been a great pleasure for me to help clarify statements in
the Qur’aan about human development. It is clear to me that these statements must have come
to Muhammad from God or Allah, because almost all of this knowledge was not discovered until
many centuries later. This proves to me that Muhammad must have been a messenger of God
or Allah.”

Dr. Joe Leigh Simpson, Chairman of the Department of Obstetrics and Gynaecology, at the
Baylor College of Medicine, Houston, U.S.A., proclaims: “…these Hadiths, sayings of
Muhammad (pbuh) could not have been obtained on the basis of the scientific knowledge that
was available at the time of the writer (7th century). It follows that not only is there no conflict
between genetics and religion (Islam) but in fact religion (Islam) may guide science by adding
revelation to some of the traditional scientific approaches… there exist statements in the
Qur’aan shown centuries later to be valid which support knowledge in the Qur’aan having been
derived from God.”