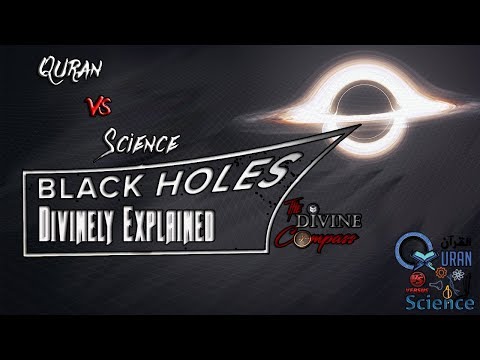 Lets skip all the glib talk, watch and you shall know.

Allah ﷻ says – "We will show them Our signs in the horizons and within themselves until it becomes clear to them that it is the truth. But is it not sufficient concerning your Lord that He is, over all things, a Witness?" {Qu’ran 41:53}

The 20th century saw a great many new discoveries regarding celestial phenomena in the universe. One of these entities, which has only recently been encountered, is the black hole. These are formed when a star which has consumed all its fuel collapses in on itself, eventually turning into a black hole with infinite density and zero volume and an immensely powerful magnetic field. We are unable to see black holes even with the most powerful telescope, because their gravitational pull is so strong that light is unable to escape from them. However, such a collapsed star can be perceived by means of the effect it has on the surrounding area.
Almighty Allah provided information about “black holes” in the Qur’an as well as other celestial bodies at a time when mankind knew nothing about celestial bodies. If you deny my claim then answer me how is all this Modern day Scientific information contained within the Quran with such clear cut verses.