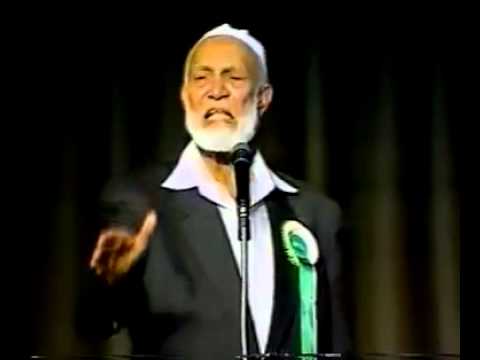 Al-Quran – The Miracle of Miracles – Lecture By Sheikh Ahmed Deedat with Question Answer Session – (London)
Visit – http://matinuddin.blogspot.com
Sheikh Ahmed Deedat was a scholar of the Bible and the Qur’an, and was more familiar and adroit with the Bible’s teachings. He had an insight and perspective of the Bible which made many Christians, he came into contact with, rethink and re-examine their faith, particularly those aspects of the Bible and the Qur’an that deal with the divine mission and life of Prophet Jesus.

He had delivered thousands of lectures all over the world, crossing all the continents and successfully engaging some of the biggest names in Christian evangelists in public debates. Sheikh Ahmed Deedat’s debates and lectures are available all over the world in the various languages in Video and DVD format. His career in the field of Comparative Religion took him across all five continents and dialogue with the heads of the Protestant world in America and the late Pope John Paul.

Sheikh Ahmed Deedat took the task upon himself and engaged his whole life in the direction of Dawah – Islamic Missionary Activity – to halt the tide of the then Christian onslaught against Islam when no other Muslim Scholar was seen answering the attacks.This became his life long ambition. He was also successful in focusing the Muslim world’s attention and resources on the propagation of Islam.

He had published more than 20 books in his time and distributed millions of copies of FREE literature and pamphlets the world over. Many of Sheikh Ahmed Deedat’s publications have been translated into the many different languages of the world : Russian, Urdu, Arabic, Bengali, Bangladeshi, French, Amharic, Chinese, Japanese, Malyalam, Indonesian,, Zulu , Afrikaans, Dutch, Norwegian amongst others.